Why hello and happy Friday, everyone! I am off of work today (hooray for compressed schedules!), so it’s going to be a sew-a-thon up in here as soon as my coffee kicks in. Best Friday EVER, amirite?

But before I go into the sewing cave, I wanted to share my first ever “art swap.” Some back-story, first: I work with a lady who is very artsy and loves beer and rock and roll… so basically the coolest person ever! Earlier this year, she was telling me about how she carves and paints gourds just for a creative outlet. Her daughter raises chickens (HECK YES!) and she was talking about a gourd she made for her inspired by a chicken coop. She showed me a few pictures and I of course lost my $#!t. I was ooh-ing and aah-ing and then she told me she would make me one! I know how much time is put into making stuff, so I wanted to compensate her somehow. She refused money and then it struck her- could I sew her something? HECK YES!!

At first I was apprehensive about what exactly she would want because I am still working out tweaks with fitting myself, much less someone else with different proportions. But then she brought up Judy Dench in the movie “The Best Exotic Marigold Hotel.” I have never seen the movie, but it’s set in India and Judy Dench wears very long, comfortable tunics. 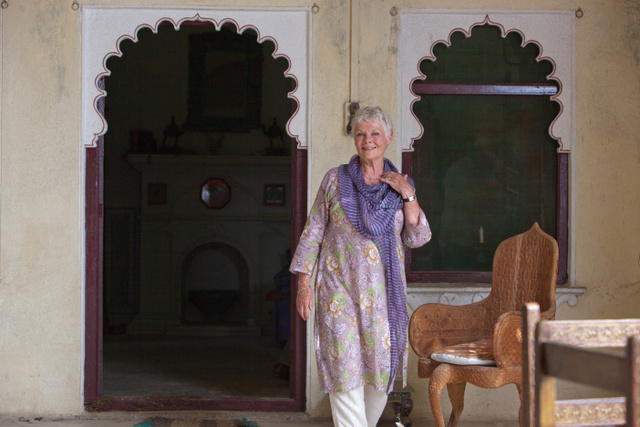 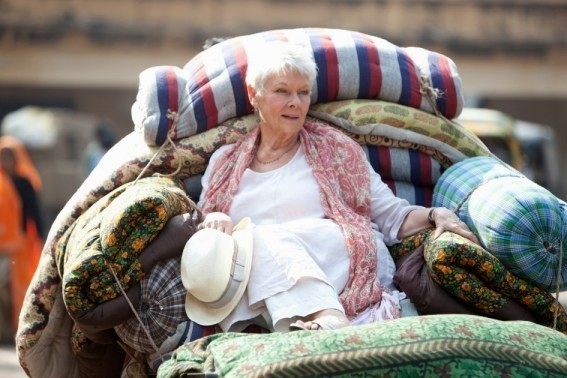 I could totally do this! My coworker said she would like something in linen and the deal was made and then it was time to hunt for the perfect pattern. I showed her some ideas, and she came back with Butterick B4406:

The lady in green’s got it down! So we went on a fabric shopping trip to Hancock Fabrics and she was on the hunt for a beautiful bright blue linen for the top and white, crisp linen for the bottom. There was no blue to be found that matched her description, so we settled on a fun lime-green linen blend. The white linen of course was easy to find. Measurements were taken and it was time to sew!

I finished the whole thing in 2 weekends back in May. I only have Brunhilde to model for me, so it may look a little sloppy since it’s not her same proportions.

Here’s the top – that linen blend was a DREAM to sew with! And I think I fell in love a little with this color while sewing it. I went back to Hancock Fabrics to get some for myself after completing this, but alas, this beautiful green was no longer in stock. 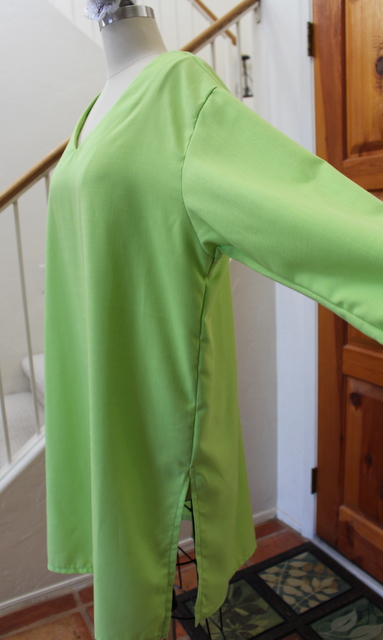 It was a breeze to sew since it’s an “easy” pattern. This is perfect for Tucson since it protects you from the sun yet feels light and breezy! 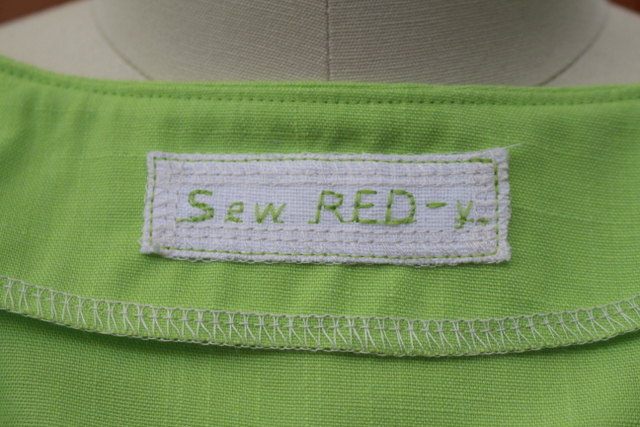 I also experimented with self-made tags. Odin can “embroider” the alphabet (plus Japanese hiragana… the selling point for me!), so I made a Sew RED-y tag from the linen scraps. I hope it’s not itchy or aggravating, but I haven’t heard any complaints. 🙂

Brunhilde is not as good at modeling pants, but you get the idea. They’re kind of your basic pajama pant with an elastic waist, so this was also a breeze to sew. It turns out I made the bottoms a little too big, so after pinching out an inch or two, I tweaked them. The picture above is “before tweaking,” but it came out looking almost the same anyway.

Of course I had to make a tag for the pants, too! So legit, LOL.

She was super happy with it and I was relieved! Now it’s time to share the awesome gourd she made for me: 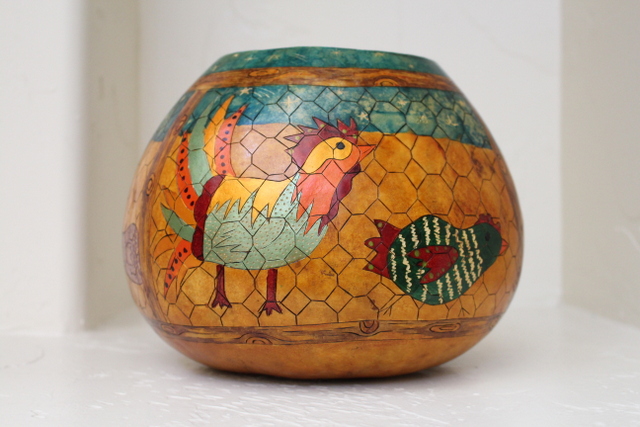 ISN’T THIS FREAKING AWESOME?!! I think I got the better end of the deal, but for me, chickens beat out almost anything. 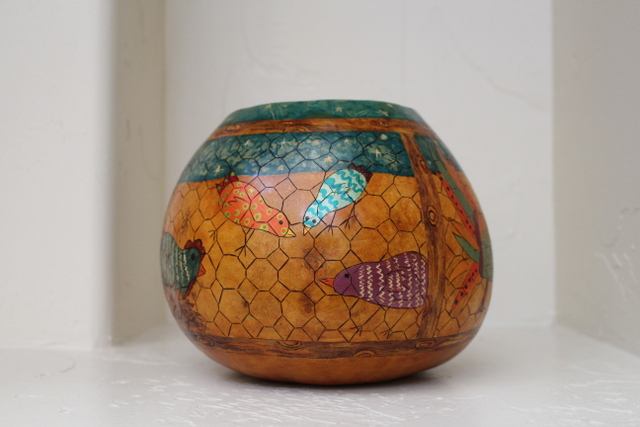 I love all of the colors and the effect of the chicken wire etching.

Look, a little Barred Rock sitting on her eggs! Just like my Caroline and Chickie von Poopenstein!

I wish there was really such a thing as a purple rooster. That would be sweet! I love this guy.

Such a cute little spotted chick!

Check out the cool night sky and the details of the “wood.” What an incredibly talented lady!!

The gourd is proudly displayed in my living room and gets rotated every so often so every chickie gets their time in the spotlight.

So, that’s it! Normally I shy away from sewing for others unless it’s a Christmas/Birthday gift for family or friends, but I love the idea of an “art swap!” Getting something hand-made with love from someone else is so cool… and it’s nice to reciprocate!

So tell me, have you sewn or created something awesome for someone else in exchange for another hand-made item? Let me know in the comments! 🙂